It’s that time of year where we pack up the car and drive all day to go on vacation. Part of this involves going to visit my mom, who lives a short drive up a mountain, in a house, in the woods, with trees and a big vegetable garden and flowers and chickens.

My mom likes chickens. We had chickens growing up and she would go out and happily feed them, encourage them to run around, and show them how to scratch for bugs. Yes, I did once find my mom showing a chicken that there was a bug in the grass and her suggesting that the chicken should eat it.  Later we moved away from that house, into town and away from chickens. Now that my mom has retired and has outdoor space, she also has chickens again.

There exist many different kinds and breeds of chickens to chose from when you want to get chickens. They are chosen according to size, breed purpose (layer or meat), productivity, and broodiness, among other factors. Some produce double-yolk eggs, some lay daily for 2 – 5 years, and some lay green-shelled eggs (‘I do not like them Sam I Am! I do not like green eggs and ham!’). There is also a pecking order that gets established within any coop, much like personalities on a playground. Roosters tend to be fond of being “King of the Castle.”

My mom has some Bantams (these are the smaller birds), some English breeds (two of which she refers to as “Henny Penny 1 and 2”), and some Ameraucanas, which lay the green eggs. 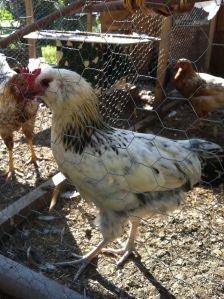 This is the Ameraucana breed that lays those green eggs. Her name is Eagle.

Each day can produce a different area of color.

A brood of chickens can only have one rooster. When chicks are born you can’t always be sure if they are hens or roosters. You can distinguish this as they get older by their features: roosters will have a more definite comb, longer tails and act more, well, cocky.  Roosters need to assert dominance and superiority in the coop. They will, literally, peck another rooster to death if there is a dispute. And it’s only a matter of time before a typical dispute happens, especially with a bunch of hens around. My mom ended up with two roosters from her dozen chicks.

The larger rooster liked to crow and strut and act kingly. They called him “King Richard.” 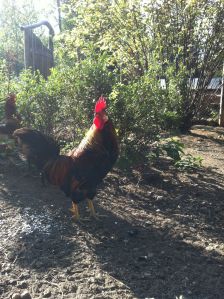 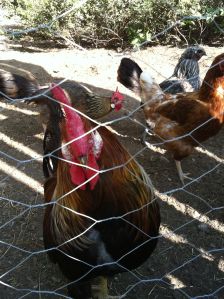 The smaller one, a Bantam, was my mom’s favorite. This rooster was submissive and gentle and careful of his place in the pack. But he turned on my mom’s partner one day with an unprovoked peck and it was commented that this rooster was “a little dickhead.” For the sake of my kids, the younger one was called, “Little Dickie.” 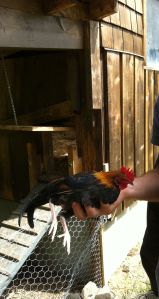 A bird in the hand. 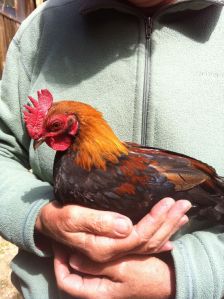 He is a strange and snuggly bird. 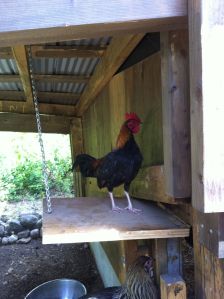 Little Dickie on his perch.

Because of his size, Little Dickie was picked on (pecked on?) a lot by King Richard. Something had to give before the situation got unfortunate. Luckily, a neighbour had a brood of Bantam hens in need of a leader, so Little Dickie went to live on their farm.

Now each rooster has their own brood and harem; things are right once again in ChickenLand.

We live in an area that allows urban fowl. Our neighbours are considering getting a small cluck of birds. Given my daughter’s affinity for collecting eggs, and feeding and learning about chickens, she would be a natural chicken-sitter if the need arose. For us, though, we’re staying away from this prospect for now. We can always go and visit my mom to get our fill of chickens, and eggs.

I post when I feel like it. That is, when I can. I write about running, yoga, health, mental health, kids, the weird things I encounter in my day, and coffee. Actually, I've only written two posts about coffee and I hid one because it was attracting too many robots.

Error: Twitter did not respond. Please wait a few minutes and refresh this page.

Mind the Gap: Who sets the table?

someone else can work this out